Categories: Behind the Scenes, Events — Lis Owuor
Now in its 11th year, Design Week Mexico is often heralded for sharing Mexico City’s thriving design scene with the global creative community. Once a week-long creative exploration and now a three-week affair with concurrent exhibitions across the creative capital, the festival is at the heart of a city designated a World Design Capital in 2018.

Over the course of October 3-20, Airbnb Design was honored to partner with the storied organization to commingle with local talent in the heart of the creative capital. We ushered in our first evening with an opening party at the Design House and rounded out the design tour by hosting creative workshops and a scholarship competition aptly named Inédito, or “unpublished.” Read on to discover your behind-the-scenes look at the designers and other creatives who brought DWM to life this year

A native of Mexico City, multidisciplinary designer Raúl de la Cerda has long believed his Mexican heritage informs his craft. It’s there in the copal trees that dot his creative space, it appears in the cumbia music pulsing from his sound system, it shows up in the Indigenous-inspired art on his walls—all these references and more were recently on display at de la Cerda’s two-room Gin Lab at Design Week’s Mexico’s Design House, a project that invited 25 local creative firms to transform a dilapidated house into a design destination worthy of an opening party.

“Design is communication. The thing that makes me different from other designers is my identity: who I am, where I live, whom I love,” says de la Cerda. From the Gin Lab’s dimly lit interiors and lush vegetation to the distilled traditional essences that filled beakers and flasks, the rooms operated as both a commentary on the designer’s heritage and the power of experimentation and sensory delight.

Located in Mexico City’s Lomas de Chapultepec neighborhood, the Design House offered creative perspectives on local heritage, collaboration across cultures, sustainability, the power of identity, and many other themes both design-centric and everyday. Airbnb Design was honored to sponsor the show house’s opening party, a booming affair that welcomed over 1,000 visitors who flowed in through the marble central atrium and up one of two staircases into the upper reaches of the three-floor design playground. Although many of the innovators had conceptualized their approach for months beforehand, the actual revamp of the 1940s-era home took just three to four weeks.

According to Jaime Hernández of México Territorio Creativo, the organization behind Design Week Mexico, creative perspectives on design are in the capital’s bones. “Mexico City is huge, so the design district is contained between the Polanco area, Las Lomas, Condesa, Roma, and now Lomas de Chapultepec,” Hernández said. “This year we decided to open Design Week with the opening of the Design House. In previous years, the house was only open to the public for 10 or 12 days, and this year we’re open for almost the entire month, so we hope to welcome 20,000 visitors.”

Long celebrated for its artisanal handicrafts, use of bold colors, and integration of natural vegetation and Indigenous influences, the concept of “Mexican design” was both nuanced and complexified at DWM’s show house.

Industrial designers worked alongside architects, while fashion creatives collaborated with interior designers to enliven a staircase with bold green paint that referenced the ancient Mayans, to refashion a room entirely out of recycled materials, or to nestle a bathtub in nature, among many other creative explorations that explored Mexican heritage. 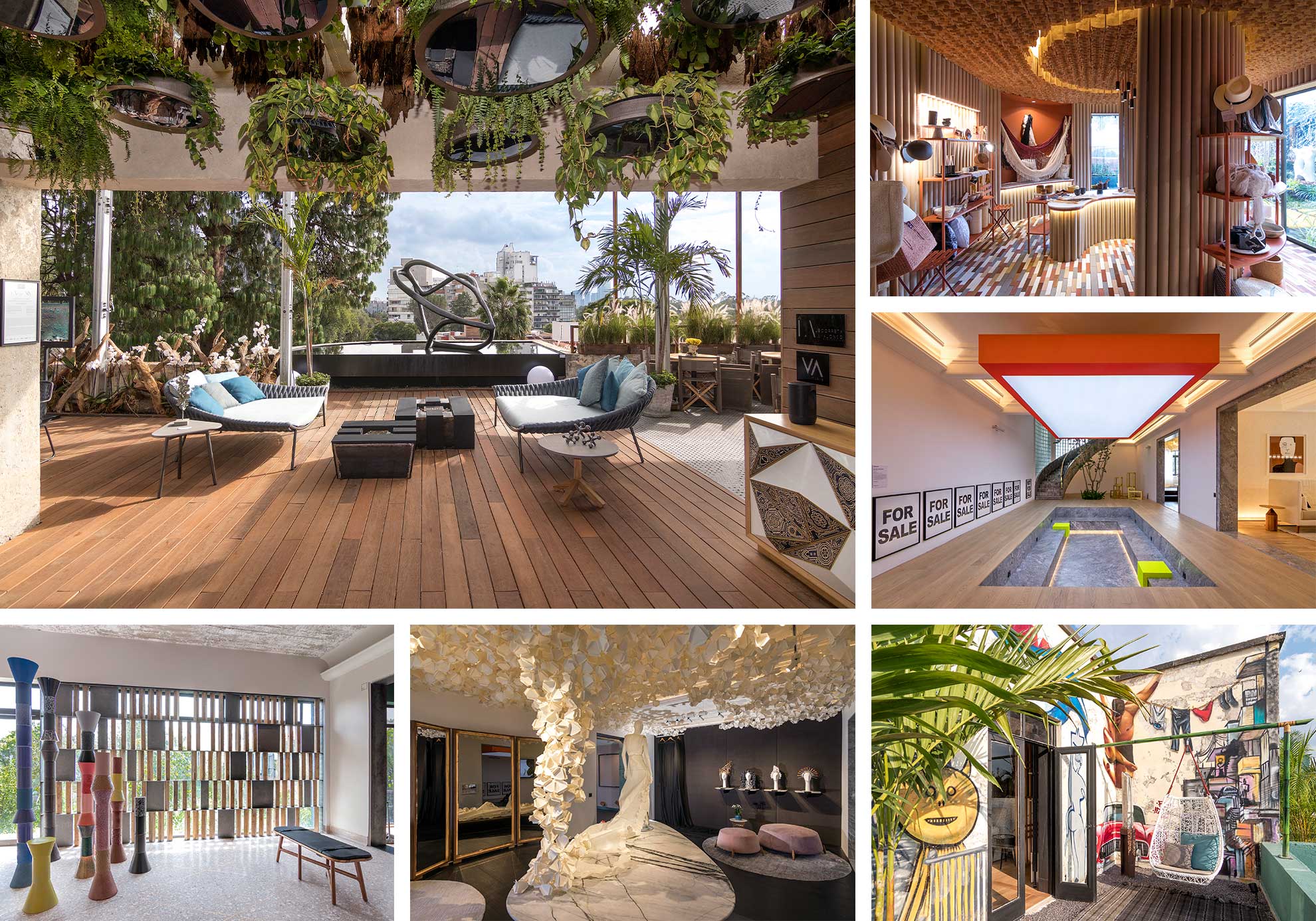 25 creative agencies came together to transform an abandoned house into a design destination.

Design expression across cultures was also a theme inherent in Sandra Gutierrez’s work titled “Presence,” a commentary on contemplation and the power of community. The designer has worked with artisans from the Mexican peninsula of the Yucatán and elsewhere for more than 20 years to create lightware that straddles the line between lighting object and handwoven masterpiece. Doubling as installation art, her illuminated Rothko Chapel-inspired piece greeted Design House visitors as they entered the building, looming near the entrance in a stately black macrame installation whose inviting central light source  piqued visitors’ curiosity.

Gutierrez hoped the piece would illustrate the power of collaborating with traditional artisans to produce thoughtful design creations that offer a space for reflection and calm, ultimately imparting resilience on visitors to face the world.

She wasn’t the only Design House creator who considered the environment around her as she conceptualized her perspective on space. Lucía Soto and Andrea Flores of design studio Comité de Proyectos aimed to create an inner sanctum that would offer visitors an opportunity to self-reflect and meditate.

“It’s a wellness space, a place for being with yourself. We thought a bath was the best space for you to be in touch with you. We wanted the colors to be natural, calm, earthy, and for the space to be filled with light,” Soto said.

Those earthy hues were on full display in vernacular materials like wood, clay, and chukum, an ancient Mayan stucco, while a chair and nearby bathtub invited guests to engage in self-care.

Making visitors feel at home weighed on the minds of the creatives, who worked hard to transform the formerly disused room into an inviting spa-like oasis. According to Soto, the sinuous curves of the mirror invited guests to pause and reflect, while the oblong terrazzo cement sink was created to elevate the art of the cleansing ritual.

“Curves make you feel at home,” Soto said. “With this space it was difficult to find curves because the space was absolutely rectangular. So we started thickening the walls to find those lines because curves are more organic and natural.”

Architect Verónica González of VGZ Arquitectura had her own perspective on how mother nature inspires discerning design choices. Nestled on the ground floor of the show house and in spatial conversation with the outdoor garden that faced it, the creative’s plant library invited the natural world indoors.

Sourced from the botanical garden at the National Autonomous University of Mexico (UNAM) in collaboration with expert botanists, the verdant space bloomed with 42 plants endemic to Mexico, including dahlias, the nation’s national flower.

“My hope is that … visitors will use native plants in their gardens since exotic species are not necessarily good for the environment or biodiversity,” She also noted that sustainable design wasn’t simply a homegrown affair—it should also be influenced by trends taking root beyond Mexico’s borders.

That’s why she sourced  sustainable wood from Chile to send a message that if a responsible material solution isn’t yet widely used at home, creatives should find a way to get it from elsewhere. Her vision came to life in a towering modular shelving unit crafted from the FSC-certified red grandis tree, known for its durability and pale color that deepens to a mahogany-like finish with age.

“Wood is structural, renewable, and sustainable…there are so many advantages to using wood,” said González.

Trash is transformed into luxe lightware in Thierry Jeannot’s space.

Sustainability was also top-of-mind for French designer and two-decade Mexico City resident Thierry Jeannot. In his three-room creative overhaul, what looked like a high-end design object from afar became much more nuanced upon closer inspection.

The designer refashioned pieces of trash into high art in collaboration with Mexico City’s traditional pepenadores, or trash pickers. Co-creating alongside one another in Jeannot’s CMDX workshop, discarded bottles became chandeliers and rubbish was transformed into luxe lightware.

“We’re wrong when we talk about trash [as if it’s only that] because it’s just another material,” Jeannot said. “I wanted to play with the idea of what we call luxury. My perspective would be: Let’s try to reuse what we can, and not only in one area of our lives. I think we have to think about overconsuming, and about short consumption cycles.” Working with his team of pepenadores for more than four years, Jeannot described a process that relied on handcraft, intense collaboration, and the power of personal metamorphosis. “The transformative power of … design not only affects the design, but also the people creating it,” he said.

Airbnb creatives interact with local creatives during workshops at the Design House.

Design’s ability to transform was also a key topic of Airbnb’s two-day workshop, El Poder del Diseño Narrativo. Led by Airbnb creatives from inclusive design and photography to interiors and graphic design, the event welcomed local individuals to learn about and contribute their own perspectives on the power of design and its capacity to offer solutions for a wide range of everyday problems. According to Jennie Perri, a Design Manager at Airbnb, “For us, storytelling is how we bring design to life—how we add meaning and emotion and really connect with people.”

The marriage of identity and design vision was a major theme of another Airbnb Design event in Mexico City. On October 5, El Arte de la Narrativa (The Art of the Story) welcomed 60 creatives to tour Pritzker Prize winner and noted Mexican architect Luis Barragán’s Casa Pedregal home and to attend a presentation on the power of design narratives.

Covering topics as diverse as creative storytelling and the importance of integrating identity into one’s creative vision, Airbnb creatives from a range of design disciplines shared an interactive presentation on how to tell unique creative stories through a variety of design lenses while guests noshed on Mexican delicacies and sipped cocktails in the Tetetlán restaurant, whose towering skylight ceilings mirroring the glass floor showcased the ancient stone that operated as both focal point and foundation.

As the affair came to a close, local guests from UX design and photography and content strategy backgrounds milled about chatting and making introductions while Afro-Latinx music pulsed in the background. According to product designer Mario Varela, the evening’s focus echoed his own approach to expressing creativity through heritage and identity in his furniture and interior design work.

“My perspective on storytelling in my discipline is personal, because I think I found my voice when I started listening to my father’s story, to my mother’s story, and to my grandfather’s story,” said Varela.

“I came to realize that I’m not just me: I’m a very deep and dramatic story of other people who came together before me and suddenly I was here. As a designer, if I want to tell that story not only to Mexicans but to visitors from other places, I need to understand my personal story. And my personal story is Mexico’s story.”

Share Tweet
Writer and editor Lis Owuor has lived her story all over the map, calling Germany, France, England and Scotland home. Currently a resident of San Francisco, she spends her free time spinning rare rhythm and blues 45s, reading nonfiction essay collections, and wrestling with the linguistic conundrums of the Internet.

Creative Space New York A recap of our dinner at Brooklyn Grange rooftop farm
Categories: Destinations, Events
Sketching Interfaces Generating code from low fidelity wireframes
Categories: Behind the Scenes
Reflecting Identity A recap of our immersive gallery experience with Joshua Kissi
Categories: Behind the Scenes, Events
Oops! It looks like this isn't a valid email address. Please try again.
Almost there! We just sent you an email to confirm your address. Just click the link inside to finish subscribing.