At Airbnb we are constantly inspired by the work of makers in our global community, and we often partner with local artists and designers to create our own products. As part of Makers We Love, a series that highlights these talented individuals, we sat down with Mark Dwight, founder and CEO of Rickshaw Bagworks. Mark is also the founder of SFMADE, a non-profit focused on localized manufacturing, he sits on the Board of Directors of the San Francisco Chamber of Commerce and is the Small Business Commissioner of San Francisco.

Thirteen years ago, Mark Dwight founded SFMADE while working at Timbuk2. Now he runs Rickshaw Bagworks, which focuses on simple, functional bags made in San Francisco’s Dogpatch neighborhood. His passion for high-quality, locally manufactured products is paired with his involvement in the maker movement and has shaped the way he designs within the local community. 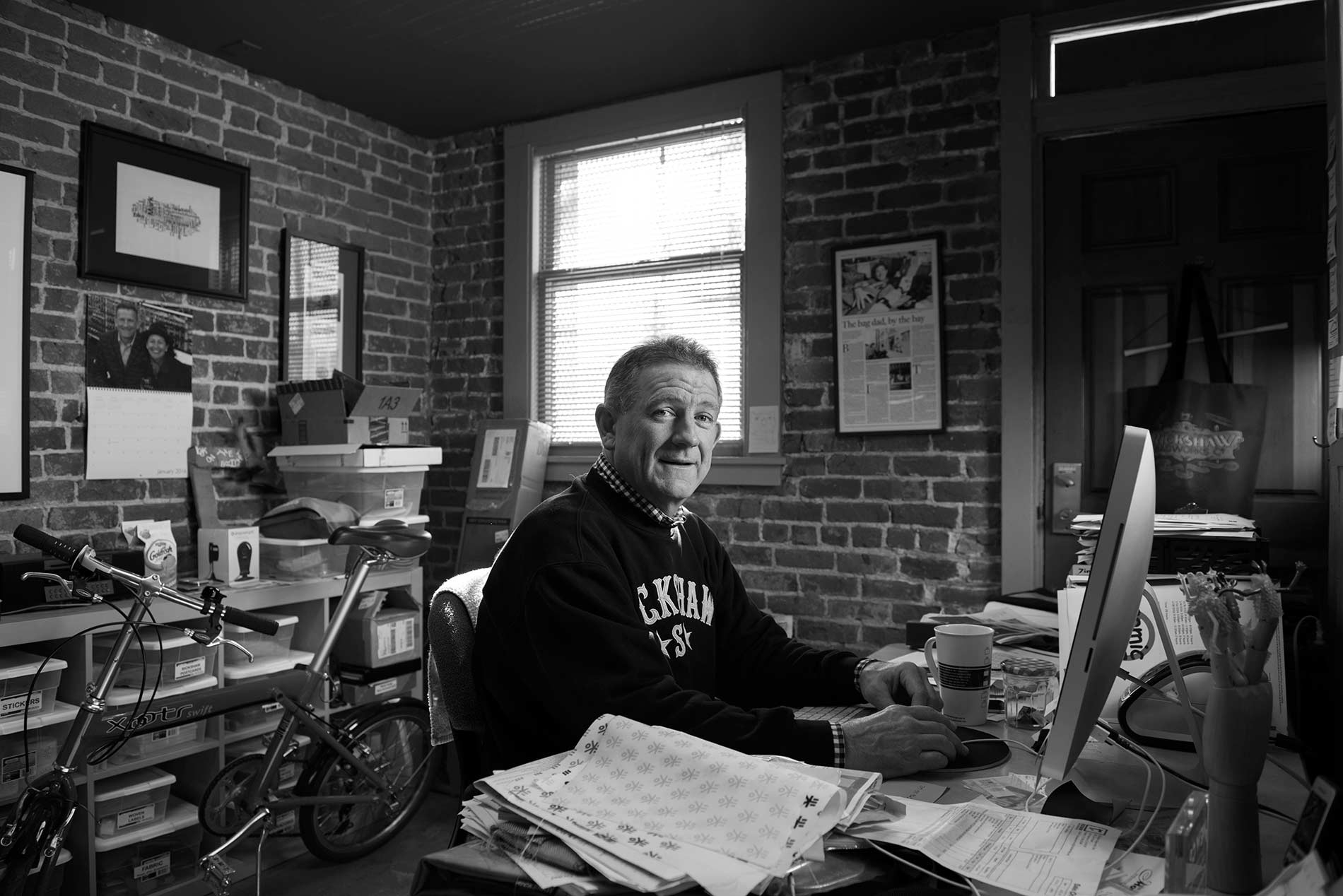 The birth of Rickshaw Bagworks

Tired of struggling to compete with overseas bag manufacturers whose huge design teams churned out dozens of new bags each season, Mark wanted to get back to basics and focus on functionality. “If you are a big company with a big design department you can crank out a bunch of bunch of designs, but we were a tiny company, and to create a whole new set of stuff three to four times a year was challenging,” he says of his time at Timbuk2. “Designs have gotten incredibly complicated, so if you go to REI today and look at a technical backpack it’s a tour de force of modern manufacturing. There are pockets and zippers and so many pieces– it’s really, really complicated.” All of that complicated manufacturing is fine when your labor costs are low, but it’s nearly impossible to reconcile with the goal of manufacturing locally. Embracing the philosophy that there’s beauty in simplicity, Rickshaw Bagworks was born.

Rickshaw’s first design, the Zero messenger bag, began with the goal of stripping a bag down to its bare essentials. “Let’s get rid of every buckle, every piece of velcro that isn’t absolutely necessary, and see what’s left,” Mark said. The result was a bag with a main compartment, two front pockets and a flap closure with no zippers or buckles. The feedback they received was overwhelmingly positive. “The bags people had previously owned had vastly more features,” Mark explains, “but they loved the fact that it was easy to find stuff, that the bag was simple and that it was made here in San Francisco.” This cemented Rickshaw’s minimal design aesthetic.

On minimalism and manufacturing

Minimalism isn’t just the design aesthetic at Rickshaw, it’s an economic imperative. “Everyone at Rickshaw is a full-time employee making $20 an hour with benefits and they get two weeks paid vacation, which is kind of unheard of in production,” Mark explains. Manufacturing locally means that Rickshaw is competing with labor rates around $1.50 an hour in China, and 50 cents an hour or less in India. Those huge differences mean that there is no way for Rickshaw to compete feature-to-feature with brands that manufacture overseas. As a result, the company’s minimal aesthetic is also a calculated design methodology that sets them apart in a sea of highly technical bag designs.

Rather than piling on the bells and whistles, Mark designs bags that are as functional as possible. “Bags have to carry stuff,” he admits, “but we don’t need 20 pockets. In fact, people complain about losing things in bags with too many features. How ironic is that? The bag that’s supposed to organize things and keep you organized… you end up losing stuff in it.” So Rickshaw focuses on other elements of design. Creating a bag that wraps around the wearer’s body comfortably was one of the goals of the Zero messenger. Other design elements, like avoiding black interiors in favor of lighter colors are also functional, and reduce the chances of items getting lost in dark pockets. It’s this simple aesthetic that defines the company’s products. 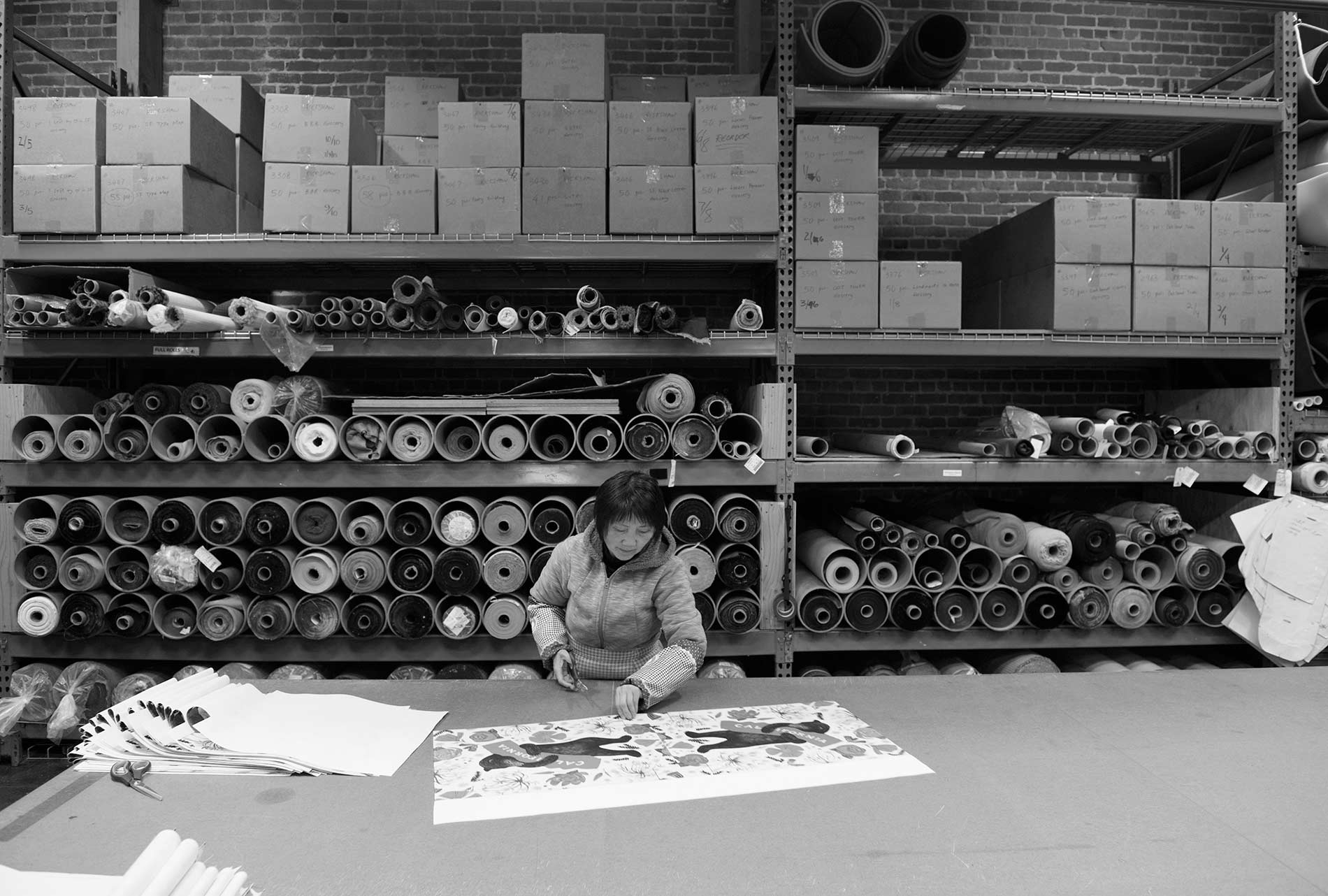 Designing within the community

If Rickshaw’s minimal design philosophy is a function of local manufacturing, it’s also a byproduct of the city itself and the people they design for. “We design for ourselves,” Mark says of Rickshaw’s process, their employees and their experiences as urban commuters. “Whether you drive, take Muni, ride your bike, walk, or whatever, your bag needs to fit into your daily routine.”

Designing within the community also means giving customers a voice in the process. All of Rickshaw’s bags are built-to-order, which creates a one-on-one relationship with each customer. “We like building what people want, not trying to guess what people want,” Mark says. “We love having a relationship with every customer, and that’s part of built-to-order.” Another part of built-to-order is customer service. “We make products, but customer service is a huge part of what we do,” Mark explains. “The lip service that companies give about giving good customer service is remarkable to me,” he adds. “It’s so important, and we’re really careful about providing the best customer service. We’re a small company, and if we do make someone angry they are going to tell everyone about it.” On the flip side, one of the benefits of being a small company is that very ability to interact with customers on an individual level. “What I like about being in the build-to-order business is that I’m working directly, not through retailers,” Mark says. “I get that one-on-one experience with people, and I get to hear feedback firsthand.” 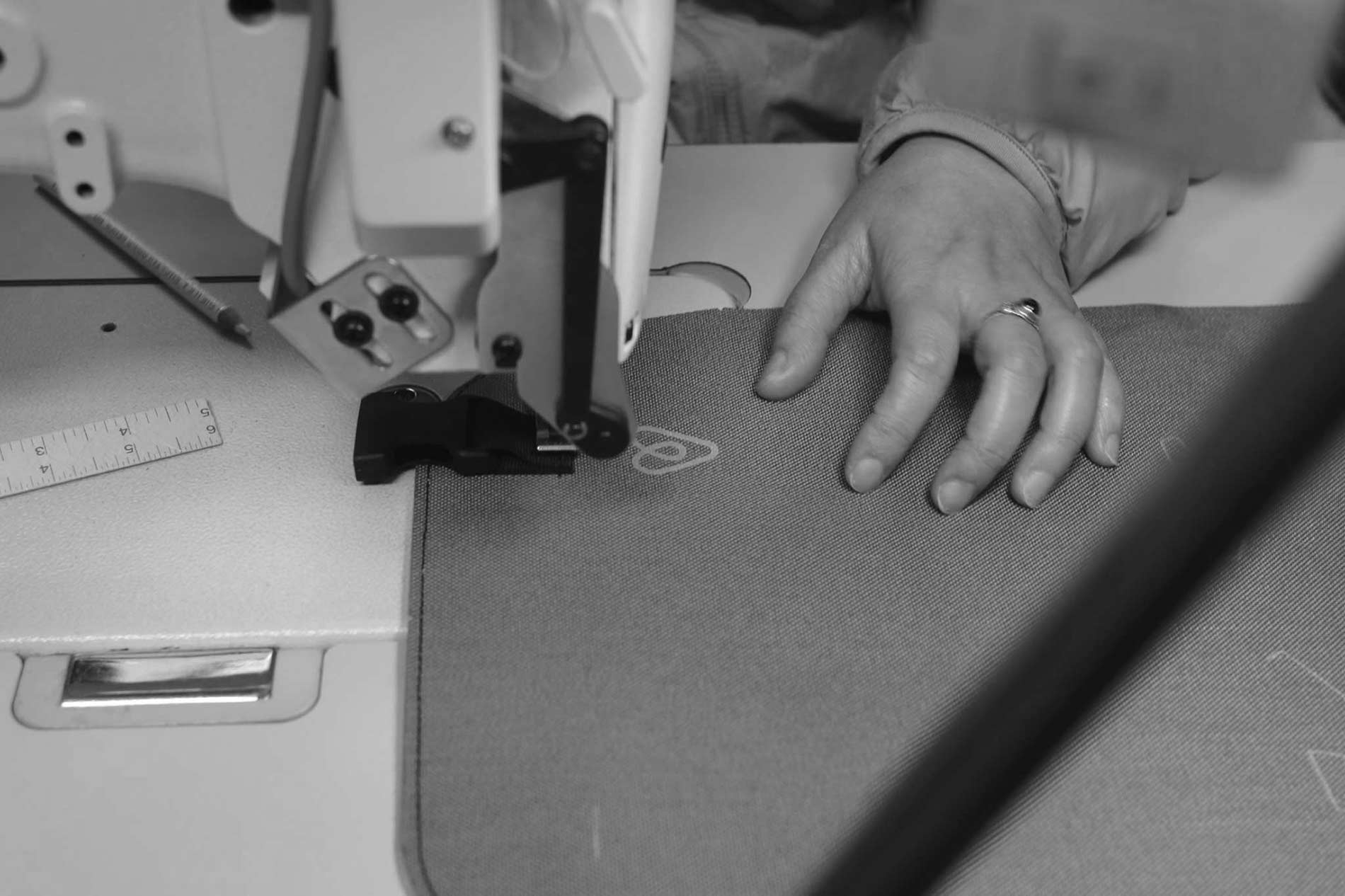 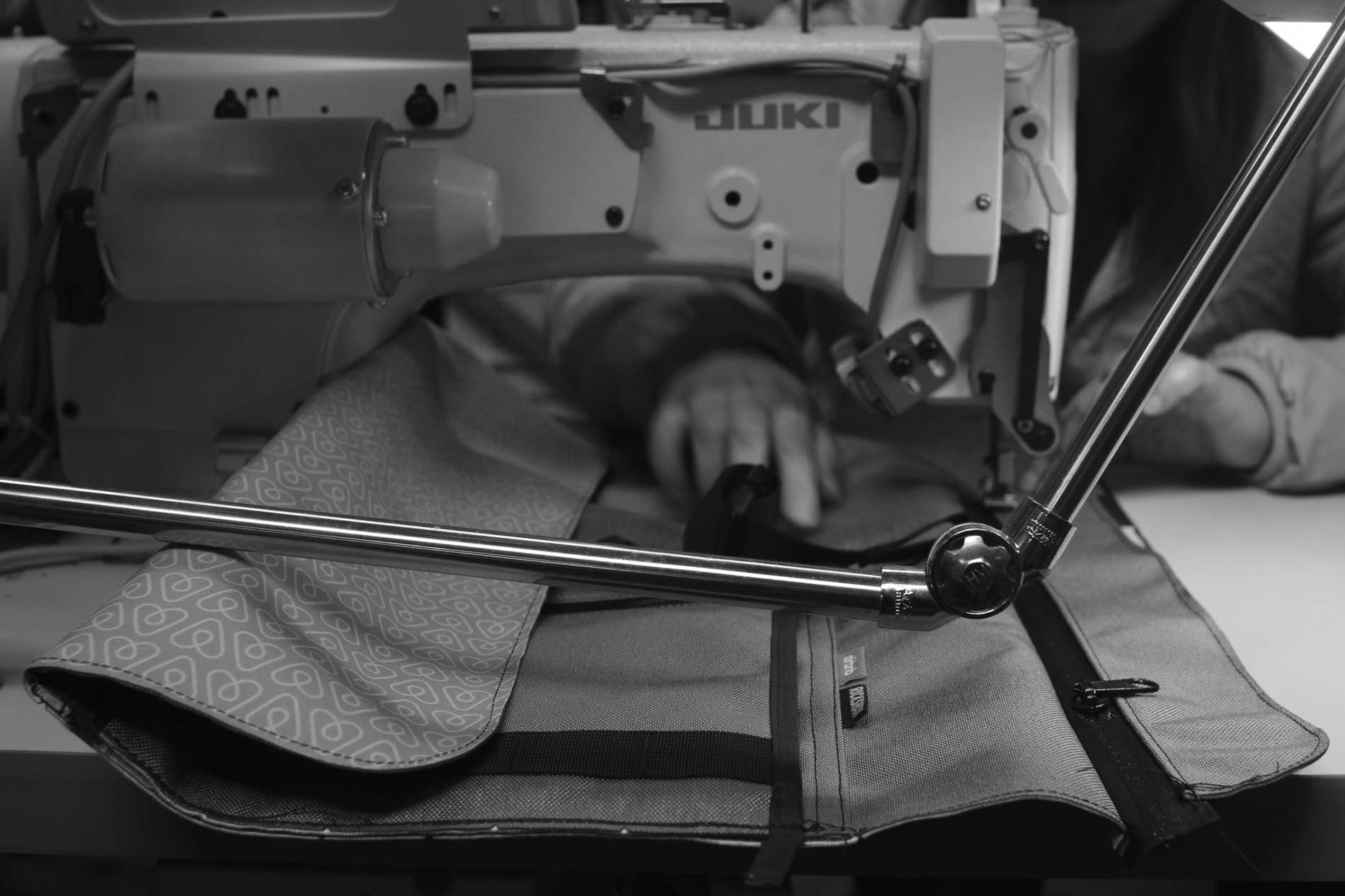 Getting involved in the maker movement

Mark considers Dogpatch to be the epicenter of San Francisco’s maker movement, and being a part of this vibrant community is one of the reasons he started the company in the first place. “Being involved with SFMADE, the Chamber of Commerce and The Small Business Commission didn’t seem as authentic to me when I wasn’t running a business,” he says “I wanted Rickshaw to be a platform for civic engagement.” As for the marriage of the maker movement and local politics, he believes the two go hand in hand. “Being involved is just part of what we do here,” he explains. Rickshaw’s Dogpatch office isn’t just a manufacturing space, it plays host to weekend events for other local makers, too. “It brings people into the neighborhood and into our shop; they become part of what we do. It’s not about getting them in our space so someone makes a purchase. It’s about getting them in here to see that we still make bags here. It’s a celebration of the maker movement and the maker spirit.”

Mark also celebrates the maker spirit through SFMADE. The organization helps other makers in the community come together to highlight the value of their products through the SFMADE brand. “It’s not unlike what’s done in the food industry with champagne,” Mark says. “You can’t call champagne champagne unless it’s made in the Champagne region in France.” He took his own manufacturing experience and the idea of geographic ingredient branding and ran with it. “I thought, maybe we can use the same strategy to elevate what we’re doing and make that available to all companies manufacturing in the city.” But he also explains that the maker movement and SFMADE are not an indictment of brands that outsource manufacturing. “They’re a celebration of running your own business,” he says. “Whether you are making chocolate, making bags or making beer. It’s all being done here in the Dogpatch, and we’re all are passionate about what we are doing.” 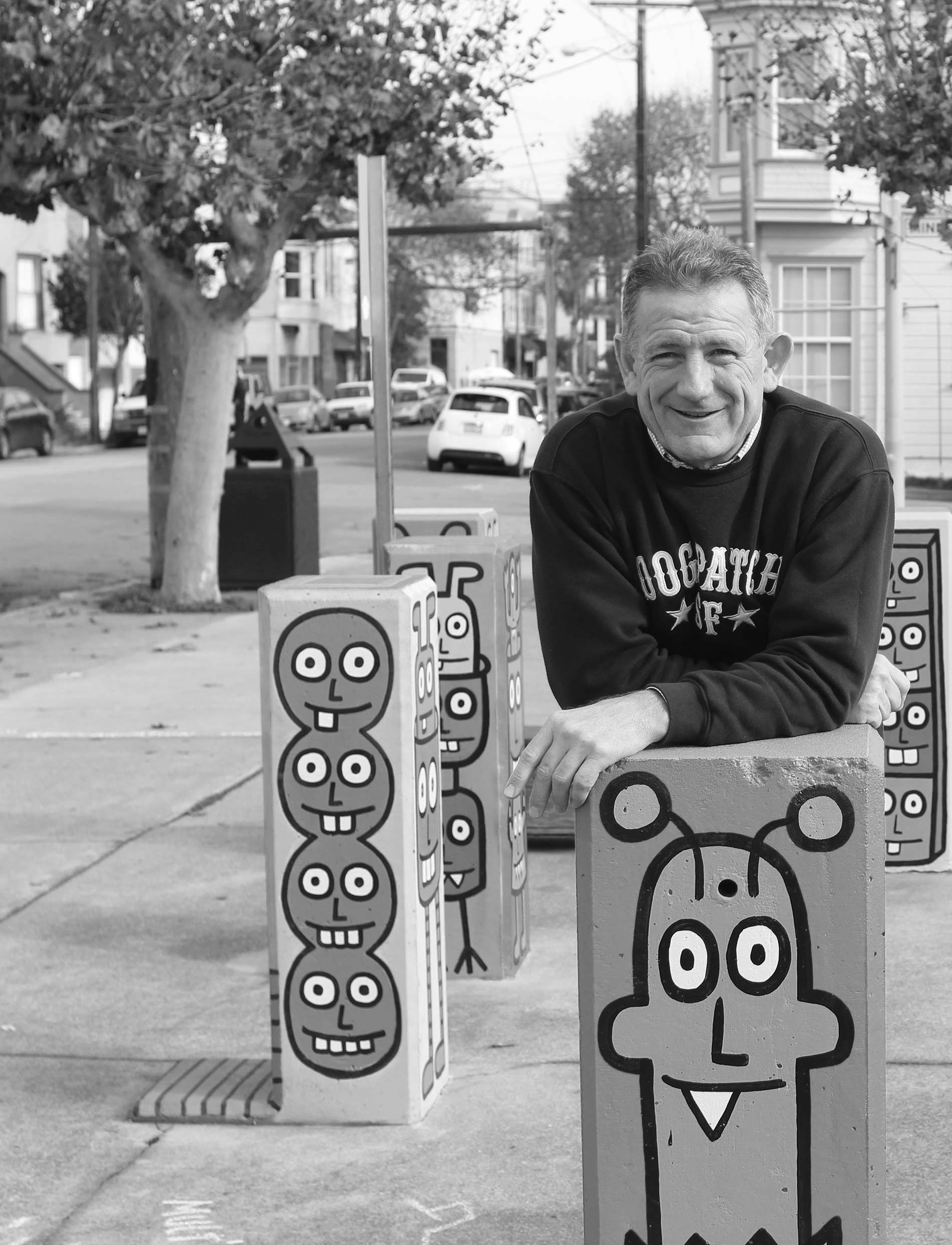 Share Tweet
Melissa is a writer and copyeditor. She loves sewing, cooking and motorcycle rides along the California coast.