How the Airbnb community inspired a global check-in tool

Much like the real world, the internet continues to complexify—it’s changed the way we think about design, and how we create solutions to address people’s evolving needs. We’ve shifted from simply designing interfaces that help people complete tasks (such as purchasing a book online), to helping people tell stories, provide services, and offer feedback—all while having an understanding of and empathy for their audience. We’ve moved from the user having a task, to the user having a user.

As a Design Lead on the Host Success team, I think a lot about building tools that help communities connect and empathize with one another. Our team is designing for both online and offline moments, check-in being a big one. It’s a moment loaded with firsts—first in-person interaction between guests and hosts, first time experiencing Airbnb in the physical world, and the first rung in the trust ladder with Airbnb.

Having observed a series of behaviors, interactions, and workarounds between hosts and guests, our team realized there was an opportunity to make this moment more seamless and predictable. We kicked off a yearlong project to design a global check-in tool that could do just that.

The decision to design the tool was informed by an intriguing host behavior. We noticed that about 1.5 million photo messages were being sent from host to guest each week—the majority of them to explain location and entry details. Photos of the home were juxtaposed with maps, lockbox locations were described, and landmarks were called out. 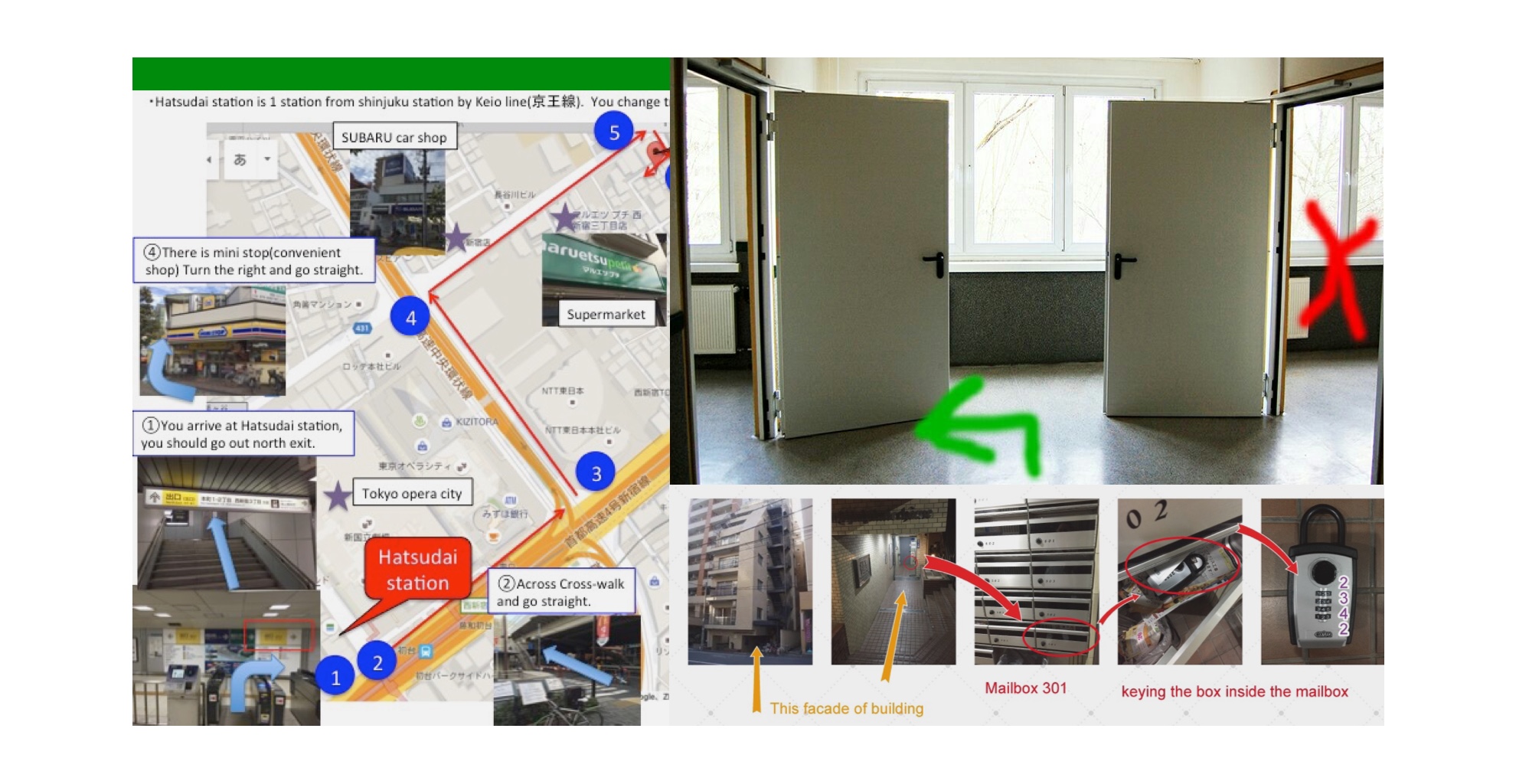 The style of instruction varied greatly depending on location. In Delhi, hosts noted bold landmarks to keep an eye out for from the taxi. In Tokyo, directions began with retrieving keys from lockboxes that are located in different neighborhoods than the homes.

Some hosts worried about guests from other countries not having internet access, so they sought explicit confirmation that guests had saved instructions via repeat messaging. Oftentimes, the hosts would send instructions in multiple languages. For example, hosts in China would provide instructions in English and Simplified Chinese.

The workarounds reflect how diverse and creative the host community is. Their behavior showed us that we could help create better guest guides by designing a tool that provides instruction consistency, is translation friendly, and is available offline.

In the context of this project, the users we were designing for were Airbnb hosts—to help them help their guests. We considered both sides of the dialogue—the writer and reader, the seller and buyer. To build a tool that supports communicative, empathetic, inclusive interactions, we had to place ourselves in the shoes of both hosts and guests.

Before we dove into design, we first wanted to put ourselves in the shoes of traveling guests. While photos can help when navigating unfamiliar places, it’s important to help hosts understand a guest’s context and mindset. They may be in a state of fatigue, managing luggage, jostling traffic, or keeping track of kids.

We enabled hosts to provide useful directions by setting a structure to add photos sequentially. We also encouraged hosts to include captions with each photo. This helped to ensure inclusivity, making the UI accessible for guests with visual impairments.

Hosts can call out important details by drawing arrows or circles over images. During the process, we realized we needed to eliminate text on images, as it caused issues with translation.

With the tool, hosts can create simple, sequential visual guides that guests can save and access offline. The captions are intelligently translated based on guest language preference.

When we launched the tool, we immediately observed unexpected behaviors. Hosts started modifying and repurposing the tool. One host used the tool to successfully create a check-in guide, then co-opted it to explain how the appliances in his home work.

We also saw that some hosts were using the tool to import third party images with lockbox codes on them. We were able to flag this as an issue to design a solution for, because we know that the critical information can’t be translated and then is lost for guests who don’t speak the same language as their host—which is 61% of the connections on Airbnb.

The launch helped us uncover some cross-cultural tensions, too. What makes some guests uncomfortable while navigating new places may be the cultural norm for others. For example, we learned that some guests felt unsafe picking up keys that were left in public places—a perfectly normal behavior in some cities.

The Launch Is Halfway

Tools are practical mechanisms, but they can also be a place for social interaction. They have the ability to be transactional, or to create helpful dialogue. While it may feel intuitive to move on from the work once practical matters are addressed, opportunities are uncovered when you stay and observe. By looking at the check-in moment with empathy for hosts and guests—and taking the time necessary to observe and reflect post-launch—we were able to provide a global check-in tool that’s smarter and more inclusive.

It’s not uncommon to mistake a product launch as the end goal. Organizations often launch, then jump right into watching the data and numbers. While this is valid and useful, this project taught us to shift perspective—that it’s just as important to observe behavior (at scale) in addition to data.

While it can be a solitary process, it’s our responsibility to see the launch as the halfway mark, step away from the noise, and note what people do with what you’ve given them. This collection of observed behavior is a goldmine that illuminates opportunities to evolve product design over time.

Share Tweet
Vibha is a Design Lead at Airbnb. Outside of design, she likes to make the perfect cup of tea while drawing letters in classic scripts. She is a pluviophile, often chasing the rain armed with a cup of tea and a calligraphy pen.