Todd Sanders is an Austin-based neon artist and avid scholar of an industrial craft that has shaped our modern landscapes. His work has been featured in Los Angeles’ Museum of Neon Art, often appears in Robert Rodriguez’s films and is collected by fellow artists including Willie Nelson, ZZ Top and Shepard Fairey. He hosted our team in his renowned Austin neon gallery, Roadhouse Relics, and we discussed how the identity of a city informs his craft. [/intro]

Tell us where do you live and one fun fact about you.

I live in Austin. It’s hard to choose one thing– everything I do just kind of folds into my art… But I love collecting mid 50’s antique advertising.

What are specific ways in which the place you live inspires the work you do?

Starting broadly, I love living in America; I love the roadside and the can-do spirit. Within that, I love Texas and the essence of the people and places I’ve grown up around. When I discovered Austin it was like finding an amazing oasis. I love everything about Austin and South Austin. Neon is part of Austin’s identity. I’ve tried to let myself be influenced by Austin, and Austin is also influenced by my personality and the work of mine that is visible here. 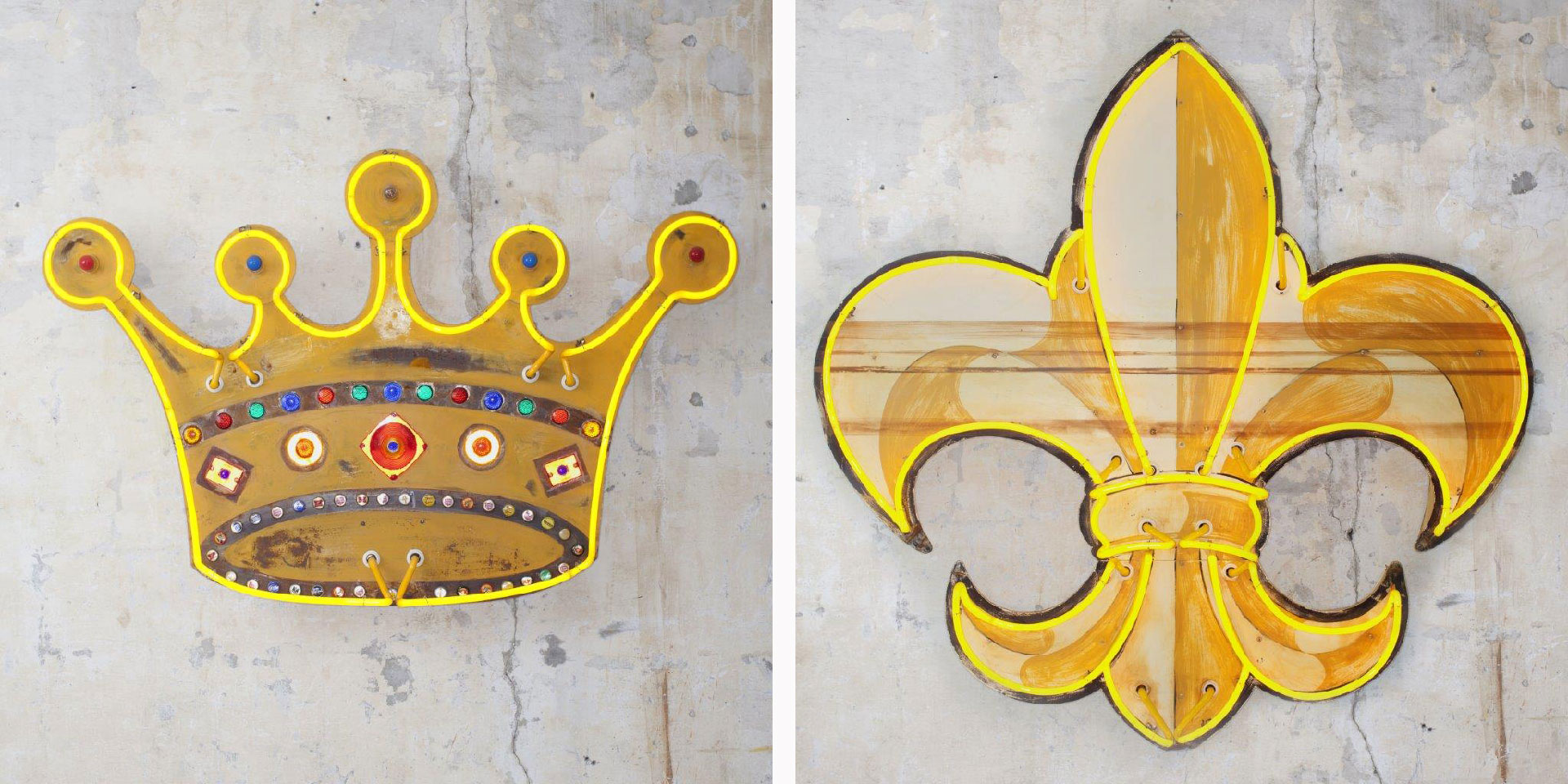 How has that impacted your work?

This town forces you to be your true self. To embrace it fully, you have to be authentic and tuned into who you are. Before I moved here, Austin was a small town between Houston and Dallas. Dallas was trying to be New York and Houston was about big oil money, but Austin was like, we’re not going to do this, we’re not going to be popular so let’s just be ourselves. This resonated with me, and it’s what I embraced about Austin.

Lubbock was this big west Texas town with amazing music, and a lot of people from Lubbock moved here and created the music scene. There were hippies with long hair wearing cowboy hats and country hicks listening to rock music who all loved Willie Nelson. We weren’t trying to be trend setters, we were just trying to be ourselves and that’s what took off. Austin decided not to worry about what everyone else thought– to do what we love and build communities that embrace it. Then the rest of the world was like, Wow! what’s going on here? That’s what created this thing. Austin makes you say, I’m going to be myself.

I’d be a very disgruntled diesel mechanic in Houston right now if I hadn’t moved to Austin.

How would your work be different if you didn’t live in Austin?

I think there’s a lot of disgruntled somethings all over the world that didn’t get the right encouragement. Doing what I dreamed of made me go against my family’s wishes, but Austin was stronger than those family influences. I came from this practical east Texas family– I was the first to go to college, and they were like, don’t you dare go off into this crazy art thing. The spirit of being in Austin made me go for it. I love them, but I didn’t listen to my family. I would die for them, but I would not live for them. I decided, I’m going to live for me.

I bought this place that was an old fruit stand in 1997, and everyone then told me I was crazy. Even people I loved and respected in Austin at the time told me I was crazy for doing it, but now it’s the most unique gallery here. It’s been a great experience. 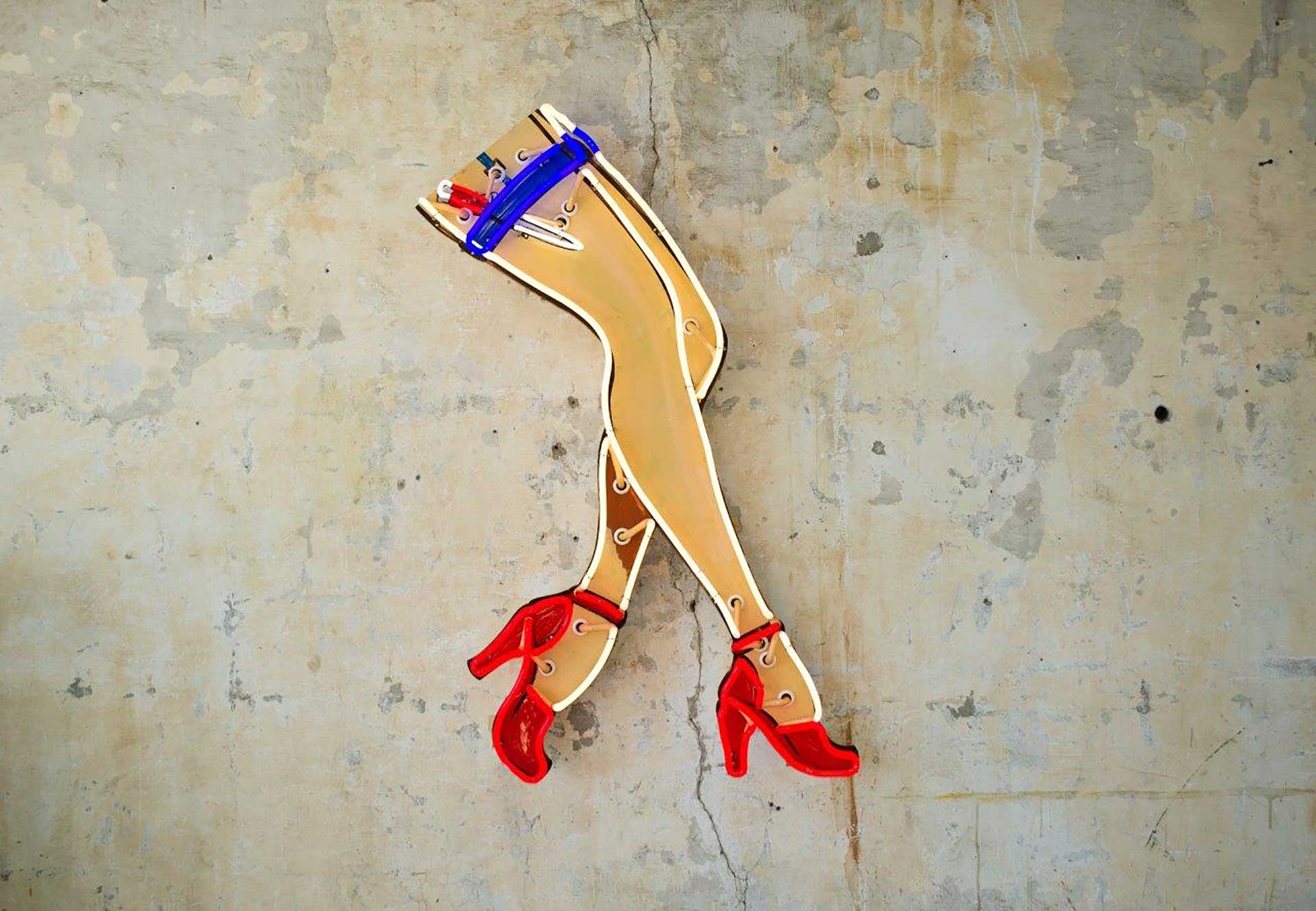 What was your first travel experience?

My most notable travel experience was after my parents divorced and I had decided to live with my dad. One day he said, “We’re going to Hot Springs, Arkansas.” So we hopped in the pickup and started driving, and as soon as we pulled into town I saw amazing neon signs on all of these old Victorians. It was my first road trip experience and my first experience with neon signs and my love of neon. I went back around 2003 and most of them are gone. They’re all Walgreens and strip malls now.

What is it about neon that captivates you?

I really believe there’s something about neon– it’s an element pulled from the atmosphere, and when you isolate it into a gas it’s kind of like the Aurora Borealis. It’s this gas that ignites in the atmosphere. It speaks to the essence of who we are when it’s lit up like that. People aren’t attracted to a place because the sign says a word, they’re attracted because neon is an element that speaks to their basic human nature. 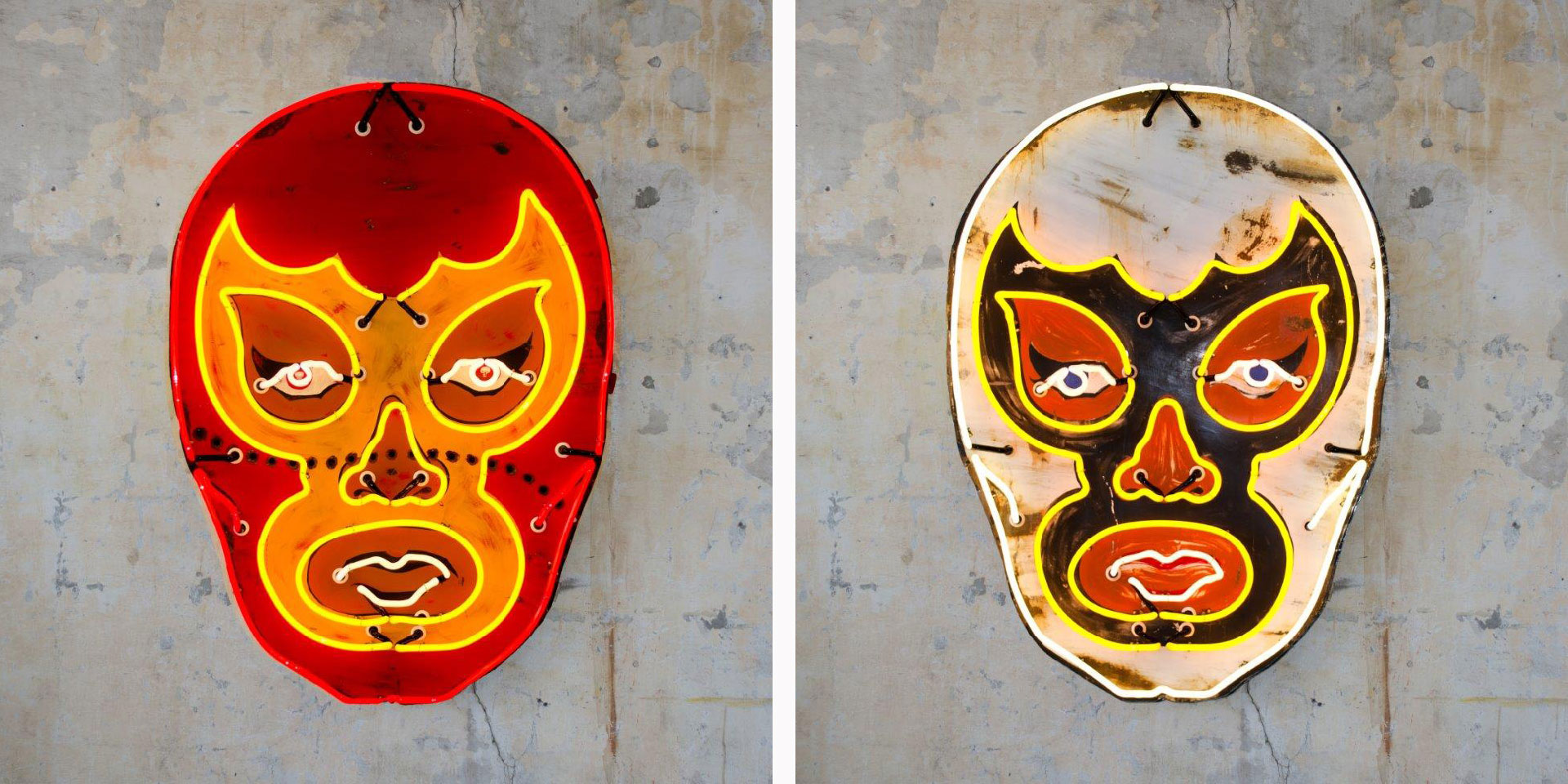 One of the most inspiring places I’ve ever been is New Mexico, and I’ve been going there since I was a kid. I love New Mexico neon signs. I went there in the early 90’s with the neon shop I worked at. My wife and I also honeymooned in Santa Fe, and we went to Georgia Okeefe’s studio. Seeing her workspace and seeing the amazing beauty there was inspiring.

There’s something about neon– it’s an element pulled from the atmosphere, and when isolated it’s like the Aurora Borealis. It’s this gas that ignites in the atmosphere.

How has your approach to your work changed over time?

I have seen a huge evolution in my work. In the early days I was creating signs that said “Beer”, “Bar”, “Eat”, you know… And now, I’m doing some pieces where I’m really trying to push the boundaries of what I’m about. I’m still a student of the technical aspects of old neon sign making, but the theme is changing, and that’s so exciting for me. Most neon signs used to be huge, like 12-25 feet. If you wanted one, you couldn’t even get it in the door of your house. I’ve started doing some pieces that are segments– I did this one that’s an old pinup girl, but it’s just her legs. The luchador heads are another new piece that I wouldn’t have made ten years ago. Early on, I was trying to make pieces that would look good in a restaurant, but now I just ask myself, “Todd, what do you want to do?”

Some disciplines, like sign making, have a strong connection to place. How do you see this in your work?

In a big way the identity of a city comes from its signage. And someone like me, I can see a picture of a sign and say, “This is Sacramento,” or “This is New Orleans.” So the styles reflect where a sign is from, but neon also creates landmarks.  People will come to my studio and say, “I’m from Atlanta and we’ve got this huge sign of a chicken, so we tell people, ‘take a left at the red chicken!’” A lot of people equate signs with where they’re from.

I took a lot of pride early on in creating new landmarks like Doc’s Motor Works on South Congress. They become what people identify with the city. People don’t think, the neon went away and now downtown is dying, but that’s what I feel in my heart. When the neon goes away or falls into disrepair, the area starts to die. I used to restore movie theater signs. I’ve done 11 of them over the years. When I do them the movie theater is restored in a way, suddenly it just starts to grow and the businesses next to them want to fix up their neons signs, and the whole area grows and comes alive.

When the neon goes away or falls into disrepair, the area starts to die.

Tell us about approaching your work as scholarship and how you research your craft.

There’s a magazine I collect called Signs of the Times Magazine. The older editions of this magazine are focused on showing the “new” neon signs, but also had a section called tips and tricks. Sign makers would write in to the magazine and tell readers how to solve design problems, how to create certain color combinations or what’s best viewed from a distance. Every issue has a type style in it, and that’s how I learned to do lettering. I would sit there and draw type styles from the magazine.

This knowledge is something that has been largely lost because these old guys knew so much and new guys had no desire to learn about it. The only way to learn about it now is to look back at the old letters to this magazine. I buy them on eBay. There’s so much information there that has been lost everywhere else, and I now own in my mind. The people who made it are dead. For the most part, that technology has been lost. That’s what makes my art so special– you feel those nuances I’ve learned from the old magazines.

Avenue B Grocery and market. There are a lot of well known places like the Continental Club and Jo’s Coffee Shop. The East Side is really blowing up, but one of my favorite places is this little wooden grocery store on Hyde Park that’s been there since the 1930’s. It’s tiny, and it still has old painted advertisements. They make sandwiches there and you can grab one and sit outside on the picnic tables. It’s one of those places that’s not super well known. It’s just this place you can pull right up to without waiting for hours. It’s really authentic and real. It’s a best kept secret. It’s just Austin not trying to be anything but original. 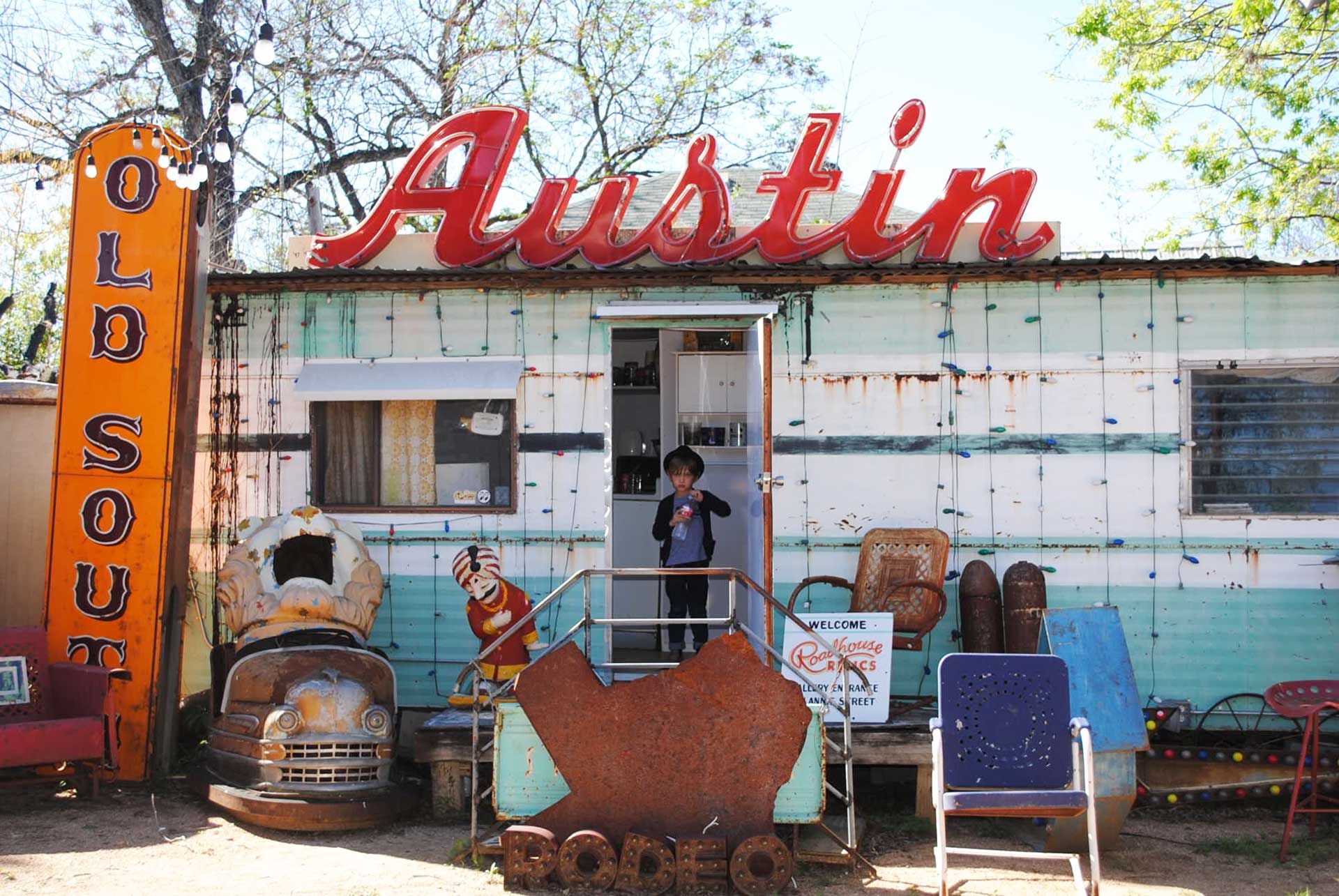