Tapping our way to LA with dancers Chloé and Maud Arnold

Creative Evolution is a series where we talk with artists of all mediums about how the places they’ve lived and visited, the people they met along the way, and the tools they had available to them have shaped their lives and work.

Tap dancers Chloé and Maud Arnold have a knack for turning dance movements into social movements. Originally from DC, the duo founded the DC Tap Festival and the LA based tap troupe, Syncopated Ladies.

A powerful art form that was born out of oppression, the sisters’ positive spin communicates fun, freedom, fearlessness, and unity. From hosting nearly 500 students from 15 countries, to creating an inspiring video piece that went viral, there’s no denying that their moves make impact.

How did Syncopated Ladies start?

Chloé: In 2003, I was at a jam session at the Debbie Allen Dance Academy that I’d been going to for a while. On this particular night it was all women, which is very rare. I was so astounded that there were girls in a circle jamming together. I asked everybody if they wanted to be a part of a group, and they’re all still part of Syncopated Ladies today. The solidarity and sisterhood that has kept us together for so long—united by this passion for tap dance—is amazing to me.

What is your goal or mission?

Chloé: I read today that the two most important moments in your life are when you’re born, and when you know why you were born. I feel like for me and Maud, we’re very clear that we were born to love, to connect people, and to spread positive energy. Fortunately, we have found something that we love to do so much, which is dance—our vehicle to fulfill our mission in life.

How does the DC Tap Festival connect to this mission?

Maud: We have one of the largest scholarship programs of any dance festival in the world. It’s based on need, not merit. Ours is probably the most diverse dance festival I’ve ever been to because we give opportunity and access to everybody, even if they can’t afford it. Kids come from Brazil, Costa Rica, Japan, Honduras, Canada—all over. It’s really exciting to have this cross-cultural exchange that comes from tap dance specifically.

Do you think dance can create real change in the world?

Chloé: I travel all the time to small towns. Obviously, we meet with a lot of people who have different political viewpoints, and yet somehow they are still drawn to take our classes and to learn from us.

We have a platform to speak with people who would normally prejudge or have preconceived notions about us, just from a lack of knowing or being connected to someone different from them.

I feel like we have the power to inspire people to love more—to think outside of the box and not just follow the ideology of whatever their parents taught them, or whatever their community beliefs are. When you put on a pair of tap shoes and connect with other people expressing themselves in the same room, that’s a really beautiful experience.

You mentioned “sisterhood and brotherhood” classes that you offer in addition to dance. What was the inspiration behind that?

Maud: Chloé and I spend a lot of time teaching in places in Middle America. For a lot of these people, Chloé and I are the only black people who they interact with on a personal level. We decided we have to do something. We have to talk about injustices in the world through our art.

This is the only place where we have such a diverse group of people coming together, and it’s a safe space to talk. It’s beyond dance. Most of these kids won’t become professional dancers, but whatever they do end up pursuing, they’ll pursue it with love, openness, and understanding.

What does your creative process look like for dance and choreography?

Chloé: As it pertains to Syncopated Ladies, we’re very fortunate to have a viral presence. I believe that’s happening because we make everything from the heart and are real. We never go into a video thinking, “Now we’re about to make this viral video.” Instead, I let inspiration from what’s happening in the world or our lives find me.

With “Formation”, the timing was everything. The minute I saw Beyoncé’s video I thought, “This is it. I feel the message and the music.” We got into the studio so quickly and turned that dance around.

The video features women and girls all around the world. How did you pull that off?

Chloe: The Syncopated Ladies got together first and I choreographed it with them. Then I sent a text message to girls I know around LA. I wanted to pull together girls of all races to show that we are in formation together. I didn’t tell them what we were doing. I just said, “I’m offering a free class”, and had an amazing turnout.

At the end, I explained to them: “This is my concept. I’m going to create a mashup video of girls around the world. If you would like to be a part of it, you now know the dance. Shoot your own video.” Then I sent the choreography to people around the world with the same guidelines. It all happened in about a week.

What message do you think the video sends?

Chloe: What was all really special to me about that video—and I think what probably touched the hearts of many who saw it—is that you saw five women of color dancing with a very specific feeling and connection, and then it felt like a surprise to see little girls and grown women from all different places doing the same dance.

You have to have allies, another community who will say, “We got your back. We’re not going to just sit by and watch.” That’s humanity, the idea of looking out for your fellow woman or man no matter who they are.

You have traveled to so many different dance festivals around the world. How is tap different in other countries?

Maud: I’ve been to about 30 countries for tap dancing, and there was tap in every one of those countries—including Japan, Brazil, Canada, England, Sweden, Croatia, and Taiwan. Tap is music. It’s percussive, so you can play it and dance to any kind of music. Since you’re not stuck with one type of music, people can express themselves through tap in so many different ways.

In Brazil, you have people dancing the samba. In Taiwan, they were using traditional music. It’s really cool to see how this American art form has spread out and morphed beyond our own culture. 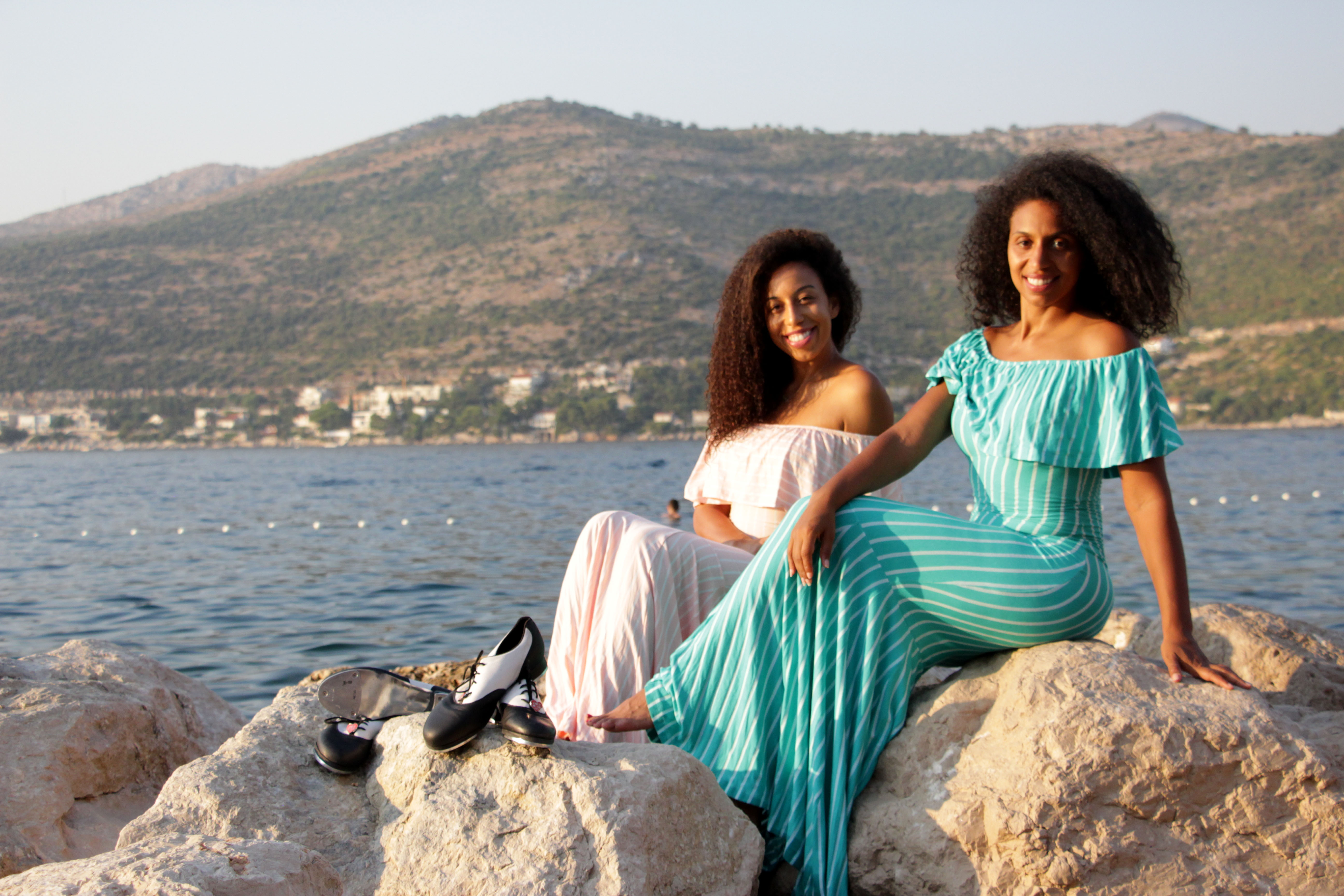 How have your travels influenced the way you think about tap?

Maud: I went to Brazil for the first time in 2003 when I was still in high school. I came back and I was like, “I am forever changed. These are my people. I love them and their approach to life.” Their approach to dancing mirrors the way they live—free, fearless, and with love and energy. The way that they live has heavily influenced the way that we live, and thus the way we dance. For example, we love moving our hips and our booties, and Brazilians are experts at that.

The beautiful thing about tap dance is that it was born out of oppression and trying to silence people, mainly black slaves here in the United States. They created an art form to communicate without words. Today, people around the world still face oppression. The way that they express through tap dance is really exciting for us, and it’s helping the art form evolve and grow.

Where else have you visited that inspired you creatively?

Chloé: I would say Paris. That’s a natural because my mom and grandma are from Paris, so it’s part of our roots. In terms of just relaxing, the Caribbean is tops, and Jamaican dancehall really inspires us. We love Latin music, so Costa Rica is another place high up on the list. I love teaching the kids there. They have so much sabor, so much flavor. It inspires me to create when I see people who dance so freely.

Syncopated Ladies is based in LA, but we also have a place in New York. We go back and forth across the country all the time, and we appreciate the polar opposite differences between these two wonderful cities. We also enjoy going to Chicago and Miami.

What do you seek out in cities you’re traveling to?

Chloé: First, you’re almost always hungry, so what is there to eat? Then what can I see, what can I learn? Then where are the dancers and where’s the music? The feeling of the city, the vibe, the architecture, the food, which often reflects the culture—those are things that I immediately pay attention to when I drop into a city.

Given that the forceful physicality of tap has long been thought of as masculine, I’d love to hear your thoughts on the connection between female empowerment and tap.

Chloé: Growing up I was inspired by male tap masters—Gregory Hines, the Nicholas Brothers. At the time, there were no shows for female tap dancers. There was “Bring in ‘da Noise, Bring in ‘da Funk” on Broadway, and “Tap Dogs”—an all-male show. Nothing was calling me or even had a place for me.

There was this idea of a boy’s club, where the art form is driven by improvisation, freestyle, and these circles where people are going back and forth at each other like in a dance movie. These circles were always men. I remember being the only girl at this jam session, and being so afraid to do it. Despite my sweaty palms and knotted stomach, I had to force myself. So I jumped into the circle. I was terrible and it was so embarrassing, but I did it. Then I did it again, and again. I became relentless.

How did you evolve from that boy’s club and find your own style as a female tap dancer?

Chloé: When I moved out to LA, under the mentorship of Debbie Allen, I had a new realization. I had spent all these years trying to fit into a boy’s club and be approved by these guys that I thought were the best of the best. I realized that that’s not receptive of who I am. I, as a woman, have an entirely different experience.

My exposure to all these different styles of dance is different because of Debbie Allen, and my other teacher Toni Lombre, and so what am I doing? Instead I’m going to create a world for us where you can dance however you want.

What does that individuality mean to you?

One of the unique things about our company is that we seek out dancers that are not cookie cutter. They don’t all move the same way and their body types aren’t the same. I love the differences, and that’s what we celebrate. We unify around the same feelings and ideas, but we are different.

Lastly, what are some of your favorite places to visit in LA?

Debbie Allen Dance Academy: They have an excellent kids program, and a Monday Night Tap Experience that’s open to all ages and levels.

Carbon: Go on Tuesday nights for dancehall, minus the big club vibe. There’s no dress code, but make sure you wear comfy shoes!

The Grove: Check out some of our favs, Nordstrom and Top Shop, to instantly feel fabulous.

My Two Cents: A homelike atmosphere with delicious food by Chef Alisa. Be sure to try the fried chicken and market veggies, and her homemade cakes.

Glass Hair Salon: Celebrity stylist Richard Glass does all hair types for both men and women. Get locks to love while enjoying the Pacific breeze in Venice.